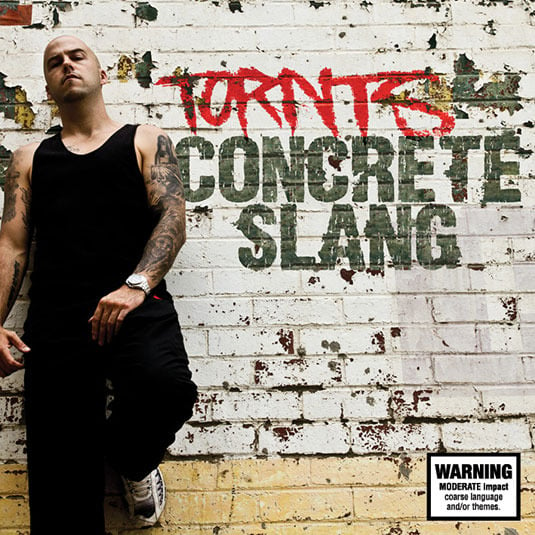 From the depths of Melbourne's underground, comes the newest installment from highly respected rapper and venomous author Tornts. Back with his highly anticipated LP Concrete Slang, Broken Tooth Entertainment’s most prolific MC delivers a hard hitting dose of reality rap and imagery riddled visions of city life in 2012.
Since he exploded on to the scene in 2003 with his groundbreaking first album Adding Insult to Injury, his uncompromising approach has inspired young hopefuls nationwide. Concrete Slang is another chapter in the evolution of undisputed Tornts originality, as he continues to grow in his style, delivery, content, and overall as an artist.
Stark and confronting, and always pushing boundaries, he has refined and honed his style of story telling narratives and rebellious social commentary to a new level. Tornts has garnered a reputation as an unique voice for the growing under-class of our sprawling cities and those who are downtrodden and frustrated with their place in society, and that voice is one that is truly to be reckoned with.
This is the Australia that most people choose not to see, crime, violence, poverty, drug problems, racism, dispossession, and a general apathy and anger at a society that increasingly ignores some sections of itself.
The production is powerful, with modern synth laced beats from himself, UK’s Beat Butcha (Mobb Deep, Lloyd Banks, Brad Strut), Holland’s Ciph Barker (Killah Priest), Melbourne’s own Wik (Crate Cartel), Sydney’s Nebs (Kerser, That’s Them), and 2Bladez (Audio Zombie Productions). The heavy production line-up lends a varied, contemporary, and immense background for his aggressive wordplay and visual verses.
Known for his vigilance in providing a visual aesthetic to his gripping tales, the critically acclaimed and highly praised video clip (and single) ‘Traumatic Cinema’, is a vivid revenge tale of abused youth. The song is a powerful account of the issues faced daily by a forgotten segment of our society. The album delves deeper into the mind of a story teller, with such tracks as ‘City Life’ - which depicts his street tainted visions of life in the Melbourne of "cold steel eyes and paranoid minds" - and ‘Undercover Maggot’, a real life account of undercover police and deceptive entrapment.
The contrast is stark when highly personal stories of his life and dark past, such as ‘The Rain’ and ‘Rise Up’, hit hard while anthems such as ‘Danger’ (ft/ fellow cohort Diem) and the cinematic tale of ‘Smack Dust’ (ft/ Brad Strut) add further impact. Any listener can tell that Concrete Slang is not your typical local rap album, but an evolved masterpiece from a veteran rapper, considered by many to be the most original and important voice of underground hip hop in Australia.

Free postage Australia wide. Send us a message if you would like Tornts to sign it for you.