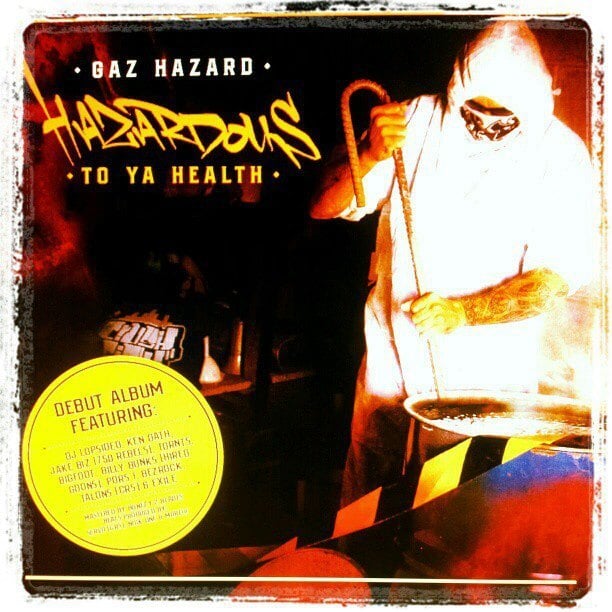 Men who have actually lived the reality of their lyrics are currently few and far between within the scope of Australian hip-hop. Look outside that scope for a moment and you’ll find a man who has lived the harsh realities of which he speaks, that man is Gaz Hazard.
Hailing from Brisbane’s south side Gaz Hazard was a founding member of underground rap group CRS (Cool, Rad, Skills or Cunt Rap Syndicate). CRS garnered cult-like support in the mid to late 2000’s following the release of the crew’s debut album, Gully Down Crooks. Known for their rowdiness and a “back to basics” approach the Cunt Rap Syndicate have finally reopened their doors and are preparing the first full-length release from one of their most promising MC’s, Gaz Hazard’s Hazardous To Ya Health.
Hazardous To Ya Health see’s Gaz trawling through a lifetime of memories from the opposite side of the law, a vantage point from which very few local MC’s can truly speak. The album features the remarkable talents of fellow miscreant DJ Lopsided (750 Rebels) who not only holds down all the cuts but also provides production on six of the albums eighteen tracks. Strong features also come from fellow CRS members Pors 1 and Servo who provide five verses and nine stellar beats respectively.
The title track also marks the first single off the album. Produced by Nick1 (Verbill, Billy Bunks) “Hazardous To Ya Health” see’s Gaz reliving the harrowing experience of chronic drug addiction and the eventual overdose that almost took his life.
Gaz also found time to hook up with close mates the 750 Rebels and Hired Goons. Ken Oath, Billy Bunks, Bigfoot and Jake Biz all pop in and speak there piece while close friend and like minded associate Tornts (whom Gaz occasionally provides hype-man duties for) provides two beats and a blistering guest spot on one of the album’s many highlights, “Terrorcell”.
Hazardous To Ya Health is an amazingly honest and well constructed solo debut from an established MC who has seen more than most, the reality of which will never be lost on the listener. At times confronting, Gaz’s truths aren’t without levity, an album that can bounce from tales of crime and south-suburban life to cold braggadocio.
Hazardous To Ya Health is an absolute must for any self –respecting fan of that REAL raw underground rap….

Welcome to the life and crimes of Gaz Hazard.