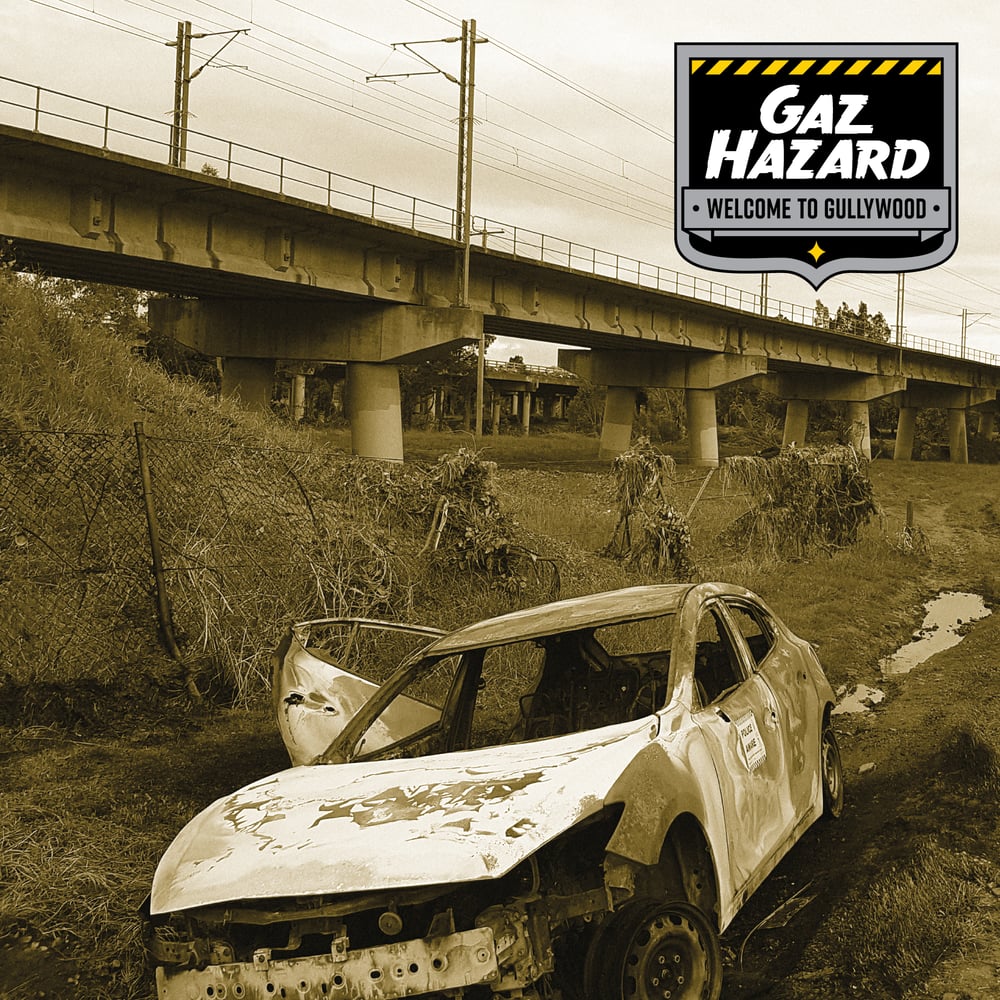 Brisbane’s home of hip-hop, Karsniogenics are proud to present the sophomore release forGAZ HAZARD and his label debut, the uncompromising and incomparable, WELCOME TO GULLYWOOD

Following 2012’s cult classic Hazardous To Your Health, W2G plays as the perfect
juxtaposition between Gaz’s criminal past and his current path in life; as a family man,
business owner and MC.After a lifestyle change and rebuilding Gullywood Studios Gaz decided to commence work on the follow up to his independent debut, 6 years in the making, W2G works as Gaz’s salvation and redemption, a testament to a life lived and the lives lost along the way.

The title track WELCOME TO GULLYWOOD kicks the album off with features from 750
REBELS veteran KEN OATH on the hook and a standout second verse from one of Gaz’s great friends, another stalwart of the Australian hip-hop game of both Hired Goons and 750 Rebels crews; the on stage and microphone monster BIGFOOT.

WU TANG is a LAZY GREY produced burner that elaborates on Gaz’s time spent on the opposite side of the law and how the music then influenced his actions and continues to do so to the present day. A vivid true story of underworld dealings that Scorcese himself couldn’t have scripted.

Wretched poetry is the order of the day on INCOGNITO. Produced by and featuring longtime friend, collaborator and Hired Goon veteran TORNTS, the two street level warriors trade bars like Spartans over a murky and belligerent soundscape that is without doubt an album highlight.

Prolific Adelaide producer REALIZM contributes three heat rocks with one of the standouts being HINDSIGHT. An amazing and soulful production, REALIZM lays the perfect bed for Gaz to give you a brief insight into how he used to live, in his own words;

“As a young man I got involved in some heavy shit when being infiltrated by an undercover cop in a police investigation where they offered sums of cash for lists of goods. This is called Entrapment but it’s a law that does not exist in this country and so the whole crew got pinched and copped our charges on the chin.. As you do in my world.”

Alongside the afore mentioned highlights, WELCOME TO GULLYWOOD packs a crew heavy ensemble without sounding guest heavy or overbearing. GAZ HAZARD shines alongside the likes of KEN OATH, BIGFOOT, TORNTS, LAZY GREY, SUSS ONE, JAKE BIZ, OVERPROOF PETE, SIMPLEX and PORSE 1 with a heavy roster of production assists from LAZY GREY, TORNTS, REALIZM, HEATA, AKIDCALLEDCHUBZ and DONTEZ of KINGS KONEKTED; all showing up to lend a fluid and complete sound to the album. Karsniogenics Head honcho DJ DCIDE lends cuts to several tracks while also overseeing the overall arrangements and flow of the record.

WELCOME TO GULLYWOOD plays like Gaz’s magnum opus, an amazing collection of tracks that display phenomenal growth as not just an MC but as a man. As an MC, Gaz brings an incredible ear for beat selection - on clear display across W2G - and spits with a brutal honesty few could muster, because very few have tread the path GAZ HAZARD has.

WELCOME TO GULLYWOOD is as entertaining a listen as it is intensely personal and brutal. A funky journey through the heart and mind of someone that has been there and lived it, Karsniogenics are proud to present, WELCOME TO GULLYWOOD.